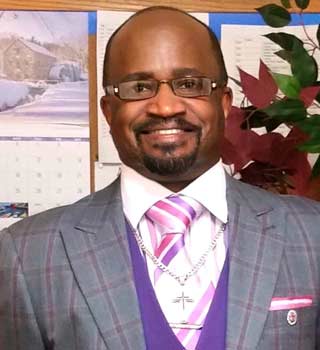 Pastor Edward Pressley is a native Spartanburg SC who grew up in the Young Drive community. He attended local area public schools and is a graduate of Laurens Dist. 55 High School. He went on to pursue an education at the Piedmont Technical College of the District of Greenwood SC and several years later, earned a Bachelor of Theology Degree from Andersonville Theological Seminary Camilla GA.

In April 2002 he met his mentor, Pastor Johnny Mitchell. It was through this encounter and under his mentor's tutelage that he received his formal training and call to the ministry. Recognizing and nurturing the anointing and calling upon his life, Pastor Mitchell appointed him to various offices and positions within the church, which included the following: Trustee, and Adult Bible Class Teacher. After serving as a minister in training for three years, he was license as an Minister in 2005 by Pastor Mitchell.

In addition to serving in various capacities of leadership throughout the years, Pastor Pressley was also involved in a variety of ministerial endeavors that prepared him to embrace lost souls and minister to the whole individual regardless of challenges or limitations. Following years of preparation, God released him to embark upon his own ministry. He was ordained as Pastor of Cedar Grove Missionary Baptist Church of Jonesville SC on March 2007 by his Pastor Johnny Mitchell. He accompanied the choir to monthly engagements at hospitals and nursing homes throughout the Jonesville area. He was also a volunteer for a number of years at the Boys Homes in Jonesville SC where he conducted worship services and ministered to Youth and Teens.

Demonstrating unwavering faith, he made the decision to devote his life and service to the ministry and Pastor full time. In 2018, he resigned from his position with Dollar General Dist. Center. The work of the Lord has always been first and foremost in his heart. Pastor Pressley has often stated that "before you leave the building, I want to give you something to think about when you go home." His charismatic style of preaching and humorous personality filters over into his sermons as he often uses practical anecdotes to capture the attention of the congregation; "so it is in the natural, so it is in the spirit."

As a sower goes forth to sow, he has an anointing that allows him to minister to those in need of healing of the mind, body, and soul. With such a great calling to fulfill, he finds time to visit the sick, make calls to members, conduct bible study and baptismal classes, and spend time studying God's word. He is supported in his ministry by his wife, Debra, one daughter, and three grandchildren. His ultimate desire is to see people fully embrace God's love and to walk in victory and power while experiencing the fullness of God's promises.