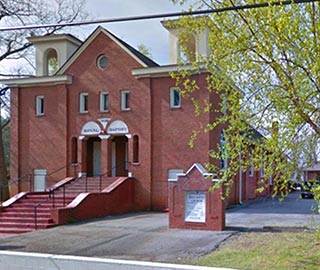 Approximately fifteen (15) members from St. Paul Baptist Church withdrew in 1888 to organize a new church, the Royal Baptist Church. The newly organized church was located on Manning Street near the Southern Railroad tracks. It remained there for a number of years.

The present lot was purchased under the administration of the Reverend S. J. Jones. At that time, a wooden structure was built. The following ministers pastored during the old frame structure's duration: The Reverends S. J. Jones, Lawrence Rucker, J. C. Brooks, C. F. Gandy, and H. C. Anderson.

During the administration of the Rev. H. C, Anderson, the four-gabled structure was wrecked by a tornado on April 30, 1924. The members raised more than fourteen thousand dollars with the able leadership of their pastor. In July of 1928, a new structure was started. It was completed in 1929. The fourth Sunday in April of 1929, the church was rededicated.

The Reverend H. C. Anderson left an estate to be shared equally between the Foreign Mission Board and the Royal Baptist Church Building Fund.

The Reverend Charles a. Cherry served as acting pastor after the death of Reverend H. C. Anderson. The following ministers served as pastors in the present structure: Reverends Maxie Gordon, B. T. Sears, S. J. Gilliard, and F. T. Fair.

During the ministry of the Reverend F. T. Fair the parsonage was built and furnished. He was succeeded by the Rev. J. C. Williams. Rev. Williams led the church in paying off the debt of the parsonage.

Rev. Williams was succeeded by Rev. R. S. Dean. Under Rev. Dean's leadership, the church was able to purchase a bus and renovate the parking area adjacent to the church.

The Rev. Charles Gadsen succeeded Rev. Dean. He continued the tradition of progress established by his predecessors.

Rev. Gadsen was succeeded by Rev. T. O. Hudgens. During his tenure several improvements were made to the church, which includes the construction of the brick signage, which still stands in front of our church.

In 1982, Reverend David L. Terry was elected as pastor. Under his tenure the Royal Male Chorus, the Royal Progressive Choir, and the Royal Brotherhood were established.

In the winter of 1997, the foundation for the Royal Baptist Church Fellowship Hall and Education Building was laid. In August of 1998 the building was dedicated.

Reverend David Terry was succeeded by Reverend Dr. Julius L. Scipio. Under his leadership, Royal Baptist Church continued to serve the community with the creation of additional ministries with the sole purpose of meeting the needs of the community. During his tenure a new parsonage was purchased. Along with the parsonage, Reverend Scipio planted a "Neighborhood Garden", where he shared his harvest with the neighborhood.

We continue to be the "The Little Church With The Big Heart" giving praises unto God for His many, many blessings. The love shown to all who worship at Royal Baptist Church is a symbol of our reverence to the Lord and our desire to be obedient to His will. A people whose faith and influence laid the foundation for this great institution are traceable to our ancestors who taught God's love to their children. Reverend James Clinkscales continues the tradition of progress that his predecessors established.